Everything seemed perfect. On thursday should be my day off at the beautiful hotel Costa Rica. My boyfriend is visiting. We have a rental car. We are in Costa Rica and hungry. Hungry for adventures, animals, people, plants, action… just everything. Because none of us have been to Central America yet, thats why we planned leaving early the next morning and head to Monteverde, to do a tour through the cloud forest, to visit the Kolibri café and of course the most-touri-venture par excellence: a coffee tour.

We left about 6.30 in the morning and were in the best mood. So it rained since 2 days straight, we decided to rush into the Maxi Palí in Nicoya and get rain capes. Rubber boots would also be nice, but did not have some. Back in the car and on. But unfortunately not as far as we hoped. Because as if it was not enough that the weather completely escalated, we also got into the middle of a strike. Close to Limonal we have been part of the demonstration for about 1 hour and drove at walking pace between the demonstrators. I, as a Rhinlander, felt a bit like in the carnival procession. Only Klömpsche (sweets) and de Höhner (typical carnival band) were missing. After a lot of patience, approving nodding and waving we finally made it and were able to drive on. 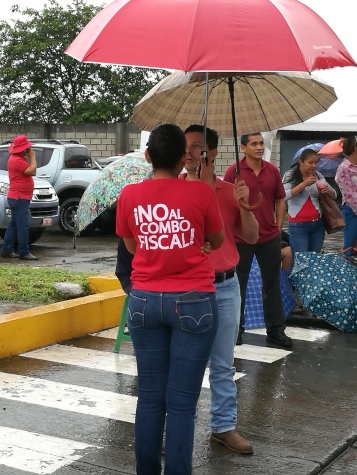 A short time later we managed to get by on a gravel road that led uphill. Quickly the temperature change became noticeable and the continuous rain was accompanied by thick fog. We skilfully ignored the “Beautiful view” signs along the way. We had our goal clearly before our eyes. No longer the cloud forest was our first point of contact, the strike and the partly bad visibility had cost us too much time. We wanted to start with the coffee tour. Arriving at the plantation we were told that the next tour would start in 1 1/2 hours. So we still had enough time to drive into the “inner city” of Santa Elena, to refuel and to get rubber boots. After the car was full (fortunately this gas station was not out of gas due to the strike), we bought rubber boots and were just on the way back to the coffee plantation a little outside the city, the lamp for the battery went on and the servo steering failed.

Smoke in the cloud forest

With deep potholes and gravel roads it’s definitely a luxury one likes to have. It was a bit more exhausting to drive, but we didn’t want to miss the tour and drove on. 5 curves later smoke rose from the bonnet. Great! Pull up, engine off, swear. Since the road section was very narrow, we wanted to clear the way and let ourselves roll backwards the mountain down into a restaurant entrance. In the Italian restaurant we were very nicely received and were allowed to call our rental car company (Europcar). They listened to the problem and wanted to send an employee directly in a replacement car. But he was supposed to come from Liberia and need 3-4 hours. It doesn’t help to get annoyed, we thought and ordered some huge pizzas.

As chance would have it, we and 2 women were the only guests and they had listened to our conversation about our situation with the waiter and explained to us that they would now also make a coffee tour and they could take us in the car. After a short consideration we said yes. Because what should we sit 3 hours idly in the restaurant, if we could undertake nevertheless already something. So we went with them. The tour lasted almost 2 hours, we walked through the coffee, sugar cane and macadamia plantations, saw the production process, got to know the difference between the different production processes and also ate cocoa beans.

At least the slimy exterior, the untreated core is simply much too bitter and does not taste good. A little further processed, the whole thing looks different and tastes excellent.

We were allowed to process the overcooked sugar cane ourselves, the result was a sugary, rock-hard mass. At the end of the tour we had coffee, of course.

Soaked but definitely a bit wiser than before we walked back to the restaurant and see: nothing.

We called the agency again, they told us the driver was on his way and needed another 20 minutes. Now I am not only since yesterday in Costa Rica and know what 20 minutes means. So we logged into the WLAN and searched for activities for the next day.

Whether this research was necessary at all and we really got a new car, you can find out in part 2…

If you can stand a bit more serious stuff, you should read the article about a rather enlightened Swedish woman